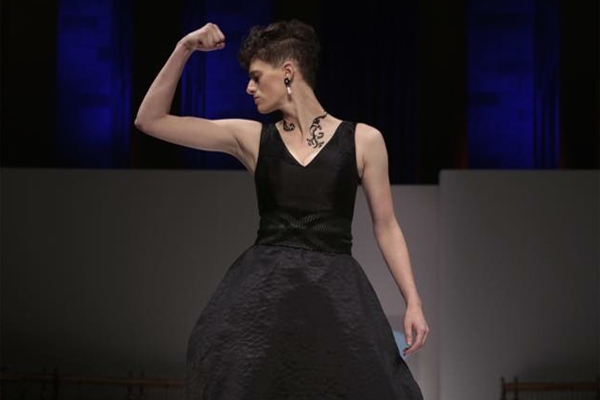 Rain Dove, androgynous/agender supermodel who is taking the fashion world by storm, joins the Nolcha Shows to showcase the latest collection from JUNGWON, contemporary yet timeless jackets offering a chic twist on classic outerwear, on September 13th 2015 at Pier 59.

Rain Dove models all forms of human expression, both binary and non-binary looks, and truly turns the concept of gender on its head. She is known for being not just a model but a movement. She has a progressive stance on gender, LGBT rights, and is a humanitarian who volunteers for a different organization or cause each week, including but not limited to homelessness, LGBT rights, and environmental causes. Prior to her fashion career, she was a firefighter in Colorado.

Continuing into its seventh consecutive year, and held during New York Fashion week, the Nolcha Shows are one of the city’s leading platforms for global independent fashion designers. Joining JUNGWON in the “Ones To Watch” show are emerging brands Charles & Ron, Anya Liesnik, Global Citizen and Planet Zero Motorsports.

Rain Dove comments: “I’m excited to be in the Nolcha Shows because they’ve allowed me to model in what would stereotypically be known as “men’s” and “women’s” clothing. I’m someone who believes gender is nonexistent and that clothing is for all humans no matter the physiology it was created for. The fact that I’m modeling this clothing means that not only do I not believe in gender but that fashion shouldn’t either. Here’s proof that the future is here with the Nolcha Shows.”

Rain Dove has been featured in Cosmopolitan’s article “11 Women Changing The Face Of Beauty” representing masculine of center lesbians. She was interviewed for Buzzfeed’s “13 Reaons Rain Dove Is The Androgynous Model of Yours Dreams” and Huffington Post’s “Rain Dove, Androgynous Model, is Breaking Barriers in Fashion.” She has also been featured in W, Vogue, Cosmo, Buzzfeed, Mashable, Huffington Post, Elle (US, UK, Spain), Marie Claire, Harper’s Bazaar, The New York Times, Yahoo News, Styleite, Gloss, The Advocate, LGBT Weekly, The Mic, Quantum, Creem, People, Refinery29, and many more.  She was a central story in the Oxygen docu-series “Living Different” and was in Dyke Central.

Kerry Bannigan, Co-Founder of the Nolcha Shows, shares: “It is a privilege to be able to work with Rain Dove and support the depths of her beliefs and what she is educating the fashion industry on. I am excited to see her walk our shows and even more so to watch the growth of her career as she disrupts the industry for positive.”

For more information, including biographies on each designer, visit: www.nolchashows.com. For any press related inquiries, please contact Alyson Roy of AMP3 Public Relations via 646.827.9594 or nolcha@AMP3pr.com.

The Nolcha Shows are a leading award-winning event, held during New Ytork Fashion Week, for independent fashion designers to showcase their collections to a global audience of press, retailers, stylists and industry influencers. Over the past seven years the Nolcha Shows have become established as a platform for discovery; promoting cutting edge innovative fashion designers through runway shows and exhibitions. The Nolcha Shows have built an acclaimed reputation as a hot incubator of new fashion design talent and are officially listed by the New York City Economic Development Corporation; offering a range of cost effective options to increase designers recognition and develop their businesses. The successful showcase consistently receives positive media coverage including features in Glamour, Cosmopolitan, Lucky, NBC, MTV and Forbes; and is supported by brands including Coca-Cola, Rusk, Vitamin Water, American Airlines, Don Q Rums and Landrover.