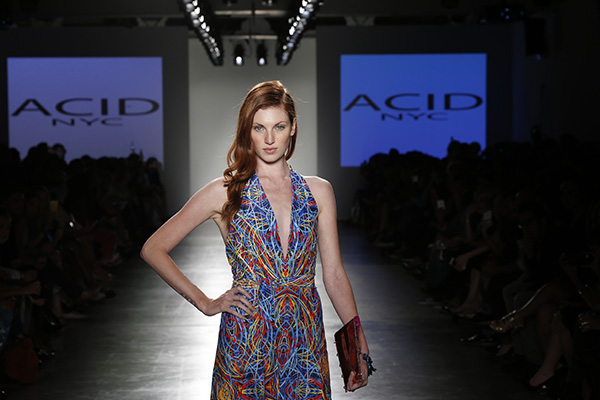 The Nolcha Shows presented by Neogrid are proud to announce that New York based fashion label ACID NYC will be returning for the second season to present their Fall/Winter 2016 collection on February 15, 2016 at ArtBeam.

Designers, Evelyn Luna and Scott Chester, were both born in New York. Raised in the Bronx, New York City Evelyn studied the H.S. of Art & Design and received her BFA at New York’s Parsons School of Design. For 13 years she was a key member of Diane Von Furstenberg’s original design staff, which launched the DVF brand and its myriad of successful designs. She subsequently became Director of DVF’s textile department. Before long Evelyn began consulting independently for DVF, Victoria Secret Swimwear and other designers in the fashion and home furnishing industry.   Scott was raised in Brooklyn and later went to H.S. of Art and Design in Manhattan where he studied Industrial design and met Evelyn. Graduating to CCS College of Automotive Design in Detroit in 1984, Scott studied product design at Pratt Institute in 1986 then transferred to Art Center in Pasadena California in 1988. In 1990 Scott moved back to Brooklyn and opened ACID Studios to design custom furniture for clients in Manhattan. This was the beginning of Arielle Chester Industrial Design (ACID) named after his daughter born in 1990.

ACID NYC designer, Evelyn Luna shares; “The Nolcha Shows provides independent designers the opportunity to show in an organized setting with professional guidance. We are so pleased that we found their services and are looking forward to presenting our newest looks on the runway!”

ACID NYC’s signature style is modern silhouettes with vibrantly designed prints. Deriving influence from hidden beauty in their surroundings Evelyn and Scott find splendor in nature, technology and visual aspects of the urban environment to create smart, sexy, and unique pieces that will take you from daytime to evening.