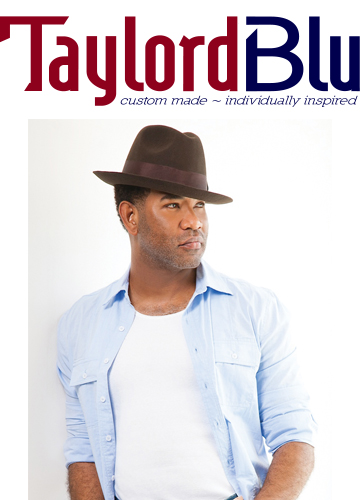 “I am honored to be a part of Nolcha Fashion Week: New York for the first time. This reinforces the fact that dreams really do come true. If you work hard and stay true to who you are, it all pays off in the end.”

The transition from model to fashion designer was a relatively comfortable one for Marlin Jones. The TaylordBlu Clothing Brand was born out of Marlin’s  love of vintage old Hollywood style. His quest as a designer has always been to redefine the way men dress.

To make a contribution to fashion just as Ralph Lauren has made to “redefining the American style” and how men dress.

Marlin Jones’ direction as a designer has been especially influenced by his fascination with the fashions of the 1920’s through the 1950’s – a defining time in fashion and American history.

Brand Philosophy
Through the core values of meticulous aesthetics, quality, craftsmanship, and attention to detail, TaylordBlu wants to make sure that when a man walks into a room, he feels confident and exudes a sense of pride and individual style. “Custom Made. Individually Inspired.”

If you could dress any celebrity, who would it be and why?
I would love to dress Will Smith for several reasons. I think that our fashion styles parallel each other of less is more. I would say that we both enjoy mixing sharp blazers with dressy denim and a button down shirt, coupled with a nice pair of oxfords that showcases a cool pair of colorful socks, for that added touch. So, having the pleasure of dressing Mr. Smith would be like dressing myself.