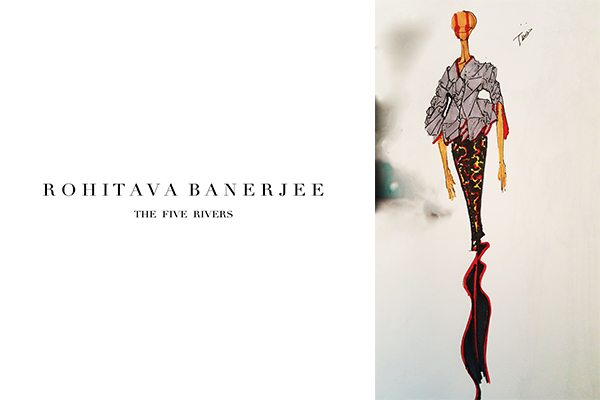 Rohitava Banerjee is a young luxury womenswear designer based in NYC. Displaying a quiet, romantic spirit from a young age, Banerjee could often be found lost in a world of stories and drawings inspired by his appreciation for history and lost civilizations.

As he grew older, Banerjee began to use his drawings and sketches as an outlet to express his true self and his true voice. His work became louder and bolder and his eye shifted to fashion and apparel design as a creative outlet. Enrolling at the Parsons School of Design in 2014, he began experimenting with original silhouettes, unexpected shapes, and unique color palettes, making a specific statement with each design. He also began to introduce embroidery and print work into his garments, as a way to fully incorporate his passion for storytelling.

Today, Banerjee’s work continues to reflect his eternal love for history and narrative. His work tends to draw parallels between history and occurrences in today’s contemporary world. With his AW16 collection, the audience can expect to be treated to a debut collection inspired by Greece and it’s people, both their mythical past and tumultuous present. To parallel the death of the Greek economy, the show will be broken out into five sections, each representing a story of death and inspired by one of the five Grecian rivers to the Underworld.

Of his debut collection, Banerjee said, “My audience can expect to see hard constructed silhouettes, fluid asymmetrical and symmetrical shapes, and narrative-based detail presented via folk-like patchwork and embroidery.”

Rohitava Banerjee will be showing at ArtBeam at 540 West 21st Street, at 3pm on Monday, February 15th. To RSVP to the show please visit: www.NolchaShows.com/3pm.