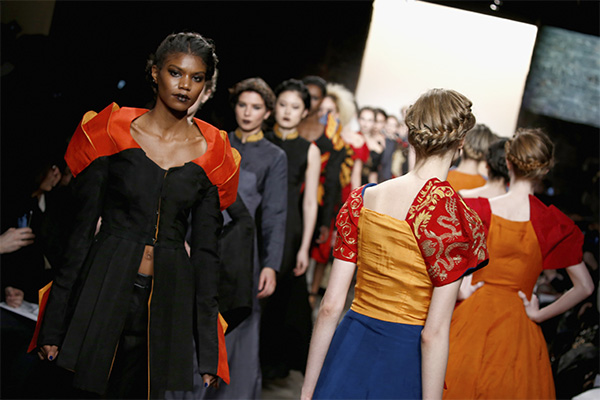 On Monday, September 12th, Rohitava Banerjee will show his latest collection, a much-anticipated follow-up to his February 2016 debut, at New York Fashion Week. Showing as part of the Nolcha Shows, Banerjee will debut his SS17 collection with a full runway show at Artbeam Studios in NYC’s Chelsea neighborhood.

Rohitava Banerjee is a young luxury womenswear designer based in NYC. When not busy designing his latest collection, he can be found honing his skills in the classrooms at Parsons School of Design, where he will be entering his Junior year. Citing fellow Parson’s graduate Alexander Wang as an inspiration, he often notes that Wang too showed his first collection at just 19 years old.

A true romantic at heart, Banerjee’s work is often inspired by his appreciation and love for story telling and lost civilizations. With his AW16 collection, the audience was treated to a debut collection inspired by Greece, its people, and their mythical history. Looking to fuse the present and the past, the show paralleled the death of the current Greek economy with stories of the 5 Grecian rivers to the Underworld. Following the show, the NY Post referred to him as a “19-year-old wunderkind” and Sourcing Journal referred to him as the “next Alexander McQueen”.

With his SS17 collection, the audience can expect to view a series of looks inspired by the five most influential Sultans of the early Ottoman Empire. Through detailed embroidery, a signature of Banerjee’s, each section will tell the story of their most notable acts as Sultan, while the silhouettes will be inspired by early Ottoman armor and weaponry.

Of his sophomore collection, Banerjee said, “I’m so honored to be back at the Nolcha Shows debuting my latest collection. For SS17 the audience can expect to see hard, sharp lines, fluid asymmetrical and symmetrical shapes, and narrative-based detail presented via my signature folk inspired embroidery.”

Rohitava Banerjee will be showing at Artbeam Studios at 540 West 21st Street, at 5pm on Monday, September 12th.